A large reflecting table shaped like the Mediterranean basin, surrounded by chairs coming from the different countries that border on the sea, is Pistoletto’s symbol of Love Difference.

In 2003 Michelangelo Pistoletto was awarded the Venice Biennale’s Golden Lions for Lifetime Achievement. At the Biennale he presented Love Difference – Artistic Movement for an InterMediterranean Politic, a project begun in April 2002 and coordinated by Cittadellarte’s Politic Office. A large reflecting table shaped like the Mediterranean basin, surrounded by chairs coming from the different countries that border on the sea, is Pistoletto’s symbol of Love Difference. Around this table, in Venice and later in other places around the world, he presented and developed many of the activities of Love Difference. 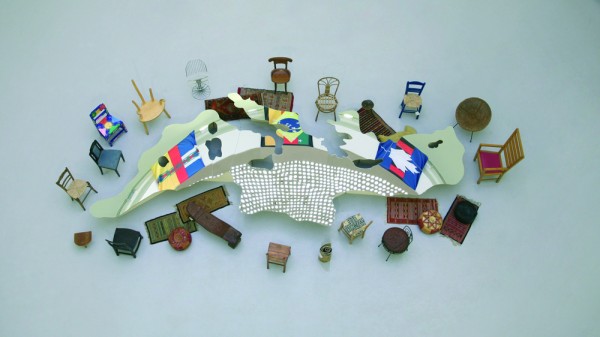 Mirror of the differences, the “Love Difference Table” with the shape of the Mediterranean Sea, makes the idea of open and horizontal project concrete, inviting different people to talk and to compare themselves. Every individual from the public becomes an active part in the definition of the project.

The “Love Difference” project activates an InterMediterranean net of cooperation among institutions, architects, writers and searchers from every country of the area: it promotes their mobility and it activates a program of cooperation in every country, aiming at developing projects and actions in which creativity builds new perspectives for the entire society.

“Love Difference is a name, a slogan, a programmatic announcement. The movement joins the universality of art to the idea of political transnationality and focuses its activity in the Mediterranean area because this area mirrors the problems of global society. On one hand the difference between ethnic groups, religions and cultures is the cause of terrible conflicts, today; on the other a dramatic situation has been created by the supremacy of powers that produce uniformity and the leveling of defenses…. Uniformity and difference are the two antagonistic terms that represent the greatest conflictual tension in the present planetary reality. A policy that leads one to “love differences” is vital to the development of new prospects in the entire social realm” (from Love Difference Manifesto, 2002, in Journal 7, Cittadellarte, Biella 2002, 47).

Marseille (France), MAC Musée d’Art contemporain, since 2007 the artwork is part of the permanent collection of MAC;